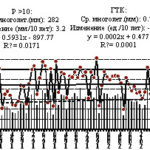 Financing. The work was carried out with the financial support of the Ministry of Science and Higher Education of the Russian Federation within the framework of the state assignment in the field of scientific activity (No. 0852-2020-0029).