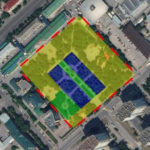 Soils of recreational areas of urban landscapes of Volgograd on the example of the Sasha Filippov park were studied. The soil cover of the park is represented mainly by typical (Urbic Technosol), replanted (Urbic Technosol (Mollic)), technogenic (Urbic Technosols (Hyperartefactic)) urbostratosems, replantazems (Phaeozem (Prototechnic)), and urbostratosems on buried chestnut soils. Under buildings and road pavements, screened urbostratosems (Ekranic Technosols). The presence of buried horizons suggests that the original soil cover in this area was represented by chestnut soils (Haplic Kastanozems (Loamic)). The average thickness of urbic horizons (UR) is 95 cm, reclamation layers (RAT) – 50 cm. The soils of the square vary in their chemical and physical properties.  The content of soil carbon in the urban and reclamated horizons varies from 0.11 to 2.46%. Chemical analysis of the urban (UR) and reclaimed (RAT) horizons revealed a low content of readily soluble salts of 0.11% and carbonates of 1.1% and 1%, respectively. In the RAT and UR layers and anthropogenic horizons, the density values averaged 1.43-1.46 g/cm3. The density value of buried horizons averaged for BMK – 1.58 g/cm3, B – 1.62 g/cm3, BCA – 1.53 g/cm3, which is higher than the average density values for native chestnut soils.  In the carbonate soil-forming rock Cca this indicator averaged 1.38 g/cm3. The obtained results allow us to study in more details the peculiarities of soil genesis in urban recreational areas and anthropogenic transformation of natural chestnut soils in the conditions of the dry-steppe natural zone.

Financing. The work was carried out with the financial support of the Russian Foundation for Basic Research within the framework of the scientific project No. 20-34-90129 «Soils of recreational territories of Volgograd: diversity, properties, ecological functions».