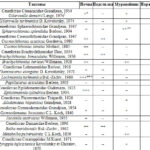 The results of studies on the biodiversity and ecology of mites inhabiting the South-West of the Kopetdag are presented. In particular, 41 species of oribatid mites have been identified in the soil, litter under trees and shrubs, as well as in anthills and holes of rodents, including 3 new species for the fauna of Turkmenistan.

The significance of these mites in the decomposition of plant residues and in soil-forming processes is shown. In the mountains the oribatid mites are capable of life from the second half of March to the end of November. It was found that from mid-May to October, the number of mites in the deserts and steppes reaches its peak of individuals 25-30 ekz./. The lowest indices of the number of oribatid mites were recorded in June specimens 2-7 ekz./ this is explained by the lack of moisture and food resources in the soil. The observations revealed the optimal value of moisture content 5-25% and soil temperature +3 — +25 0C   for the development of mites.

Our research has revealed, for the first time, the breeding centers of mites in anthills. Two ecological groups of myrmecophilic mites have been identified: detritus-phages and zoonecrophages. Myrmecophilic detritus phages were assigned to 14 species of mites that were found in the nests of ants feeding on the seeds of herbaceous plants. The group of myrmecophilic zoonecrophages includes 6 species of mites. They are found in the nests of ants that feed on the corpses of insects.

Financing. The work was carried out on the topic of the State assignment of the Department of Biology of the S. Seidi Turkmen State Pedagogical Institute «Biodiversity of soil mites of various systematic groups (Acari: Sarcoptiformes, Trombidiformes) and their ecology» (No. 10.00.2313).