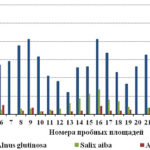 The results of the study of the immigration of Acer negundo L. into floodplain forests dominated by Alnus glutinosa (L.) Gaertn in the National Park «Buzuluk Pine Forest» in the Orenburg Region are given. In this region, the species is found in a variety of afforestations: according to modern data, it occupies more than 20 thousand hectares, or about 5% of the total area of the forest fund, is actively naturalized in natural floodplain forests, is included in the «black-list» of the Orenburg region, «black-lists» of nearby regions and the «black hundred» of invasive species of Russia as a whole. The work was carried out on two ribbons of test areas on the right and left banks of the Borovka River, flowing through the protected area (total 65 areas 20 × 50 m). The woody floodplain phytocenoses of Borovka River are formed mainly by A. glutinosa, Salix alba L., A. negundo and Populus nigra L. The dominant breed throughout the study area is A. glutinosa (occurrence 100%), the average number of which is 545 pcs/ha (80.43% of the total number of trees), which is significantly more than the total number of all other tree species. The average number of A. negundo is 34 pcs/ha (occurrence — 66.2%), the invasion species ranks third among tree species, after S. alba (46 pcs/ha, occurrence 63.1%). Another 11 wood species are classified as species of little importance in the floodplain communities of the Borovka River. According to the data obtained, the dense mature riverine forest, formed mainly by A. glutinosa with an admixture of S. alba and P. nigra, maintains the balance of its species diversity, and the invasion and dominance degree of A. negundo does not exceed the values of a secondary species with an average participation in phytocenoses 5% (maximum — 17-20% on separate test areas). The invasion of A. negundo into the floodplain forests of the National Park «Buzuluk Pine Forest» leads to undesirable floristic pollution of a specially protected natural area.

Financing. The work was carried out within the framework of the state task of the South Ural Botanical Garden-Institute of the Ufa Federal Research Centre of the Russian Academy of Sciences, topic No. AAAA18-118011990151-7 «Biodiversity of natural systems and plant resources of Russia: assessment of the state and monitoring of dynamics, problems of conservation, reproduction, increase and sustainable use».