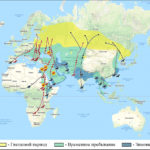 Using the GPS-GSM trackers, we collected the data on the wintering routs of 4 young greater spotted eagles (Clanga clanga). They were tagged with rings and trackers in the central part of European Russia, then migrated to wintering grounds of the Middle East (Israel, northern Egypt, Saudi Arabia), southeastern Africa (Sudan and South Sudan), and southern Russia (Republic of Adygea and Krasnodar Krai). Their arrival dates varied significantly, the average being the 27th of October (±22 days), while their departure took place almost simultaneous, roughly on the 24thof March (±3 days). We determined that, unlike the western populations of birds, such as Polish, Baltic and Belarusian ones, these spotted eagles leave their wintering grounds later.

The results of this research showed an uneven distribution of spotted eagles throughout their wintering areas. Most of the time they kept to their favorite places of natural and anthropogenic humid habitats. During the entire wintering period, the eagles used about 2 to 4 key areas, moving between them periodically and rarely leaving their boundaries.

Acknowledgments. The authors thank NABU International for their support of the BirdRussia work in Central Russia. We thank M.V. Korepov for his training and help in the bird tracker-tagging. We thank Kordian Bartoszuk for providing us with hardware and software for bird tracking and for his valuable advices; D.A. Karvovsky, M.N. Ivanov, O.A. Zubkova and E.A. Akhatov, as well as students and postgraduates of the Moscow State Pedagogical University for their active participation in our research.

Funding. This work was carried out within the State Task No. 0089-2021-0010 of the Moscow State Pedagogical University “Fundamental Problems of Wildlife Protection and Rational Use of Bioresources”, and No. FMWZ-2022-0002 of the Water Problems Institute of the Russian Academy of Sciences “Research of Geoecological Processes in Hydrological Land Systems, Formation of the Surface and Ground Waters Quality, Management Problems of Water Resources and Water Use under the Climate Change and Anthropogenic Impacts”.