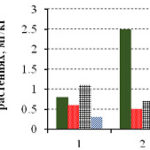 In the flat zone of Dagestan, arid mixed grasses steppes are common. As part of their herbage, yarrow plants are present, forming extensive thickets in the lowlands. For the first time in Dagestan, the accumulation of heavy metals in the organs of plants of the genus Achillea L. and in soils was studied. The content of Fe, Mn, Pb, Cd in the aboveground and underground mass of plants of the genus Achillea L. was determined in natural and anthropogenic disturbed areas, as well as in the soils on which they grow. It has been established that the accumulation and distribution of heavy metals in plant organs is influenced by pollution from motor vehicles. In Achillea nobilis plants selected in Uchkent and Stalskoye villages, the cadmium content exceeds the maximum permissible level by 1.2-1.7 times. According to the calculated coefficients of biogeochemical mobility, it was revealed that plants of anthropogenically disturbed habitats are characterized by a high accumulation of Fe, Cd, but low – Mn, Pb.

Financing. This work was carried out in the Laboratory of Soil and Plant Resources of the Caspian Institute of Biological Resources of the Russian Academy of Sciences, state assignment No. 0205-2016-0003 “Dynamics of Soil Cover and Ecosystems Bioproductivity in the Northwestern Caspian Region and Eastern Caucasus” (state registration No. АААА-А17-117081640024-6), and it was also funded by the Program of the Russian Academy of Sciences Presidium, No. 1.21 “Biological diversity of natural systems. Biological Resources of Russia: Assessment of their condition and basics of Monitoring”.