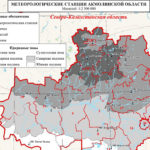 Long-term dynamics of average air temperatures and annual precipitation amounts confirms the reality of climatic changes that began in the 70th of the last century in the Akmola region that is one of the leading agricultural regions of Kazakhstan. Cultivation of cereals, in particular, spring wheat, which is known to be extremely sensitive to climatic and weather conditions, prevails in the structure of agricultural production of the region. Based on the analysis of climatic indicators for 1931-2019, according to the available data of meteorological stations, the intraregional features of climate change, which led to an increase in the yield of grain crops, were identified. Correlation analysis established a high dependence of yield on the climatic conditions of the warm period. With the preservation of the current level of farming culture and the continued growth of average temperatures, a decrease in yield is expected in dry-steppe and southern steppe regions of the region. In the northern steppe regions, more intense trends in climatic indicators of the cold months favor an increase in yields and an expansion of agricultural production. Further development of agriculture in Akmola region requires taking into account intraregional differences in the intensity of climatic trends. In order to avoid the negative consequences of climate change, it is proposed to introduce adaptation technologies, to diversify agricultural production, to develop organic agriculture and actively to support agricultural producers.

Funding. This work was carried out as part of the Research Project of the Geographical Faculty of Moscow State University.