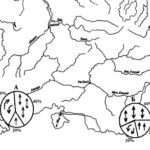 The most important nodes are distinguished as standards of plant biodiversity in various sectors of Southern Siberia: A – Saylyugem – Mongun-Taiga in Gorny Altai and Western Tuva; B – Sangilen-Darkhat in Southeast Tuva and Mongolia; C – Selenginsk-Daursky (Western Transbaikalia) in Buryatia. In the mountains of the Saylyugem ridge and Mongun-Taiga, there are many mountainous Central Asian species located on the eastern border of their ranges – the share of border species is up to 40% (Сoluria geoides, Potentilla lydiae, Allium pallasii, Lonicera microphylla, Artemisia obtusiloba  and others). This points to the historical links of this western sector of South Siberia with Middle and Central Asia. Endemic species that have the highest diversity index (60%) give originality to the flora of the Sangilen Highlands. The presence of boundary species as western and eastern geographic orientations, including Caragana jubata, Cymbaria dahurica, Echinops latifolius, Onosma gmelinii, Oxytropis tragacantoides, Lonicera microphylla and others, also indicate intense migration phenomena in the mountains of the Sangilen-Darhat node. The West Transbaikal node in the south of Buryatia, characterized by the presence of relics of the nemoral flora of East Asia, is of particular interest. These are Ulmus pumila, Armeniaca sibirica, Rhamnus erythroxylon, Filifolium sibiricum, Spodiopogon sibiricus, Saposhnikovia divaricata. According to this indicator, the flora of the Selenga Dauria has the highest level of diversity (40%).

The work reveals the features of floristic wealth and the diversity of the steppes of Transbaikalia and the Baikalia region, and the natural factors that cause them. It is shown, that this is a consequence of the ecotonic position of the territory (zonal-provincial), but also of the global climatic influence (Pacific, arid Central Asia). The complexity and variegation of vegetation in the steppes of Baikal Siberia gave us various interpretations of the boundaries of individual provinces and districts in geobotanical zoning schemes. The most complex is the vegetation of the steppes and forest-steppe of the Selenginsk midlands of Western Transbaikalia, which has been identified as a special buffer province.

Funding. This work was carried out with the financial support of the Russian Science Foundation for Basic Research, Project № 15-44-04112р_Siberia_a – «Relict and endemic plants of Transbaikalia: analysis of populations state, ecological mapping of refugium and perspectives of genetic fund preservation», Project № 16-04-20813 – «Rare plants and phytocenoses of Baikal region and adjacent territories». 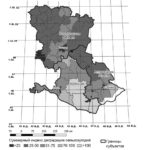