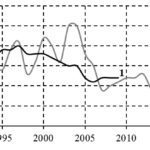 Distribution patterns of spring and summer droughts characteristics during high and low annual humidification periods are studied in twelve federal subjects of the South of European Russia for the period 1901-2018. During this time, four periods of different humidification conditions (alternate more humid, dry, humid and again dry periods) with variable durations are observed through data on anomalies of the aridity index in seven regions: Kursk, Belgorod, Voronezh, Saratov, Volgograd, Rostov Oblasts and the Republic of Kalmykia. The draining period was noted in Samara and Astrakhan Oblasts from the beginning of 20th century until its middle. Then the draining period changed to more humid. The most frequent change of periods with different humidification conditions was observed in Stavropol Krai, where five alternate periods were distinguished. It was found that the frequency of spring and summer droughts is consistent with the long-period humidification conditions. According to data of the Standardized Precipitation Index (SPI), it increases during the dry period by an average of 1.5 times while the intensity of droughts rises insignificantly. The increased humidification conditions observed in every above-mentioned federal subject in the second half of the 20th century changed to drier conditions in the beginning of the 21st century. The spreading of drier conditions began from east regions. The development of the dry period of humidification in the 21st century is confirmed by a distribution of a negative NDVI trend throughout the territory. While the aridization trends are not statistically significant in the regions of the South of European Russia in more than a century, there are prolonged interdecadal periods of aridizational strengthening and weakening, which are characterized by significant differences in frequency and intensity of spring and summer droughts.