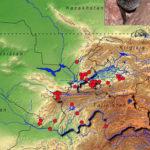 Barbaestella walteri is one of the rarest and poorly studied species of bats in Central Asia. The publication presents the results of hypothesis modeling of potential distribution of B. walteri in the Central Asian region using MaxEnt program. In the analysis the geographical coordinates of 57 sightings of the species and bioclimatic data from WorldClim2 database were used. The obtained model agrees well with the known locations. The distribution area does not show a continuous continuum, but consists of separate sites tied to the most optimal climatic parameters. These sites are confined to foothills and valleys along which the species penetrates mountains up to a height of 2500 m. In addition to the already known areas where the registration of the species is known, the model predicts a distribution in western Iran and eastern Turkey. Six bioclimatic parameters (isothermality, temperature seasonality, minimum temperature of the coldest month, average temperature of the driest quarter of the year, average temperature of the coldest quarter of the year, and precipitation of the warmest quarter of the year) proved to be the most important in constructing the model and made the maximum contribution (95%) to it. The interpretation of these parameters is consistent with the actually observed habitat conditions of the species. B. walteri demonstrates the highest probability of being found in areas where the climate is hot enough, with very little precipitation in the summer period, and in areas where the temperature in the coldest months rarely falls below zero.