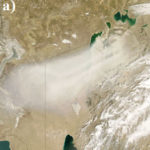 The article discusses aerosol pollution of the atmosphere in the Southern Aral Sea region as a factor of climate change in this region. The main causes of pollution are wind and convective removal of soil particles from the underlying surface. The differences between these two types of emissions are shown. Since the effect of wind removal of aerosol from the drained bottom of the Aral Sea on the regional climate has been studied in our previous studies, in this paper, only convective removal of soil microparticles from desert surfaces is considered (for the first time) as a factor of increasing summer air temperatures in the Southern Aral Sea region. The paper presents the results of calculations of the mass concentration of aerosol in the surface layer of the atmosphere caused by convective flows. The quantitative assessment obtained by mathematical modeling methods showed the significance of convective aerosol removal in the Southern Aral Sea region, which increases the aerosol concentration to 1.2 mg/m3. As a result of numerical experiments, the dependence of the air temperature increase by convective removal of soil particles on the aerosol dispersion in the range of 0.3-5°C was revealed. The absence of precipitation in the Southern Aral Sea region in July-August, which counteracts the convective removal of soil aerosol by leaching the aerosol from the atmosphere and wetting the underlying surface, ensures a continuous flow of aerosol particles into the atmosphere, which increases the climate-forming effect of the process under consideration.

Acknowledgement. The authors are grateful to Dr. B.F. Abdurakhimov, Professor of the Department of Applied Mathematics and Computer Analysis of the National University of Uzbekistan for the hypothesis expressed in a private conversation about the possibility of climatic forcing of air temperature by convective emission of particles of the heated underlying surface.

Financing. The research was carried out within the framework of the state task «Research by methods of mathematical modeling of the dynamics of ecological and climatological processes in the Southern Aral Sea region».