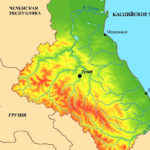 The results of the analysis and comparison of the coenoflora of birch (Betula litwinowii Doluch., B. raddeana Trautv) and pine (Pinus kochiana Klotsch ex G. Koch.) forests of the Gunib plateau (Inland mountain limestone Dagestan) are presented. The forests on the Gunib plateau are confined to the northern, north-eastern and north-western slopes, they occur at altitudes of 1400 — 2170 m above sea level. The analysis was carried out on the basis of field research materials 2011-2013, 2018-2020 — 53 standard geobotanical descriptions. When collecting the material, the task was to reflect as much as possible the diversity of communities of birch and pine forests of the Gunib plateau.

The species composition of vascular plants of birch (251 species) and pine (226 species) forests was revealed. The spectra of the leading families of both coenoflora were compared. Both cenoflora belong to Rosaceae-type that is characteristic of the Central European group of flora. The leading 6 families account for 50% of the cenoflora species of birch and pine forests (129 and 113 species, respectively). 130 species are common to communities of birch and pine forests.

The species composition of dominants and codominants of the grass-shrub layer of birch and pine forests is analyzed. Species that play a significant role in the communities of only one of these formations have been identified, despite the fact that both formations occupy similar ecotopes and in most cases the same species are dominant and co-dominant of the grass-shrub layer in these communities.

The ratio of florocenoelements in the grass-shrub layer of birch and pine forests is determined. A greater number of species belonging to the forest cenotype grow in birch forests: 29% of forest species from the total number of species in birch forests and 21% in pine forests. There are fewer species characteristic of meadows, including subalpine and alpine, in birch (57%) forests than in pine (64%). Also, fewer ruderal species were found in birch forests (2.5%) than in pine forests (4.5%). One of the reasons for the revealed ratio of species belonging to forest, meadow and ruderal florocenotypes in the coenoflora of birch and pine forests, in our opinion, is the peculiarities of the renewal of these forest-forming species on the Gunib plateau.

The analysis made it possible to identify differences in the habitats occupied by birch and pine forests at extreme values of light and moisture availability.

Aknowledgements. The authors are grateful for the help in conducting field research of the Director of the Mining Botanical Garden of the OP of the Russian Academy of Sciences, Doctor of Biological Sciences, Professor Z.M. Asadulaev, Head of the Ecological and Botanical station «Pyatigorsk» of the BIN RAS, Candidate of Biological Sciences, D.S. Shilnikov, N.S.W. of the Laboratory of General Geobotany of the BIN RAS N.S. Liksakova.

Financing. The work was carried out within the framework of the planned theme of the V.L. Komarov Botanical Institute of the Russian Academy of Sciences «Vegetation of European Russia and Northern Asia: diversity, dynamics, principles of organization» (No. 121032500047-1) and the planned theme of the Laboratory of Introduction and Genetic Resources of Woody Plants of the Mountain Botanical Garden of the Russian Academy of Sciences «Structural and functional features of plant communities with populations of rare and resource tree species (on the example of the Eastern Caucasus)» (No. AAAAA-A19-119020890099-4). 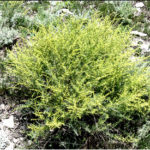 The results of the study of communities with the participation of Dagestan saltwort (Salsola daghestanica (Turcz.) Turcz.) in Piedmont and Inner-mountain Dagestan, where 108 species of flowering plants were identified, among which are: Caragana grandiflora (M. Bieb) DC.); endemics of the Greater Caucasus: Matthiola caspica (Busch) Grossh., Salvia canescens CA Mey, Elytrigia gracillima Nevski; endemic of Dagestan Convolvulus ruprechtii Boiss., as well as a species listed in the Red Data Book of Russian Federation Artemisia salsoloides Willd. Identified associations with the growth of a rare endemic species of Dagestan S. daghestanica Salsolosum graminioso-xeroherbosum, Salsolosum graminioso-artemisosum, Caraganetum varioherboso-graminosum, Caraganetum salsoloso-artemisosum are found only in the territory of the Eastern Caucasus. Caraganetum salsoloso-artemisosum was described on three sample plots on the northwestern and eastern slopes of the Nadyrbek Ridge with a steepness of 30-40º (near the village of Dubki, Piedmont Dagestan). The shrub layer (crown density up to 45%) is formed by 12 species, dominated Salsola daghestanica (Turcz.) Turcz. and Caragana grandiflora (M. Bieb) DC. The total cover of the grass-shrub layer is up to 60%; the species richness is relatively low (40 species), dominated by Artemisia taurica Willd. Caraganetum varioherboso-graminosum is described on the northwestern slope of the Nadyrbek Ridge (near the village of Dubki, Foothill Dagestan) with a steepness of 40º. The shrub layer (total crown density 29%) is formed by 9 species, the dominant is the large-flowered Caragana grandiflora DC., the occurrence of which is 20%. The herb-shrub layer is sparse, with a coverage of 4-5% there are Artemisia taurica Willd., Stipa caragana Trin., Salvia canescens C.A. Mey., Melica transsilvanica Schur. Salsolosum graminioso-artemisosum communities are described on the slopes of the Chakulabek Ridge in the vicinity of the village of Tsudahar (Inner mountain Dagestan). In a sparse tree-shrub (12%), S. daghestanica dominates with a crown density of 10%, prevails Colutea orientalis L., Spiraea hypericifolia L. The total projective cover of the grass-shrub layer is 54%; species richness is relatively low; Artemisia taurica Willd is dominant in abundance and projective cover (50%). Salsolosum graminioso-xeroherbosum is described on the slopes of the Chonkataw Ridge in the vicinity of the village Gubden (Foothill Dagestan). The tree-shrub layer is dominated by S. daghestanica with a crown density of 42%. In the grass-shrub layer, the dominant species with a projective cover of 3 to 5% are Artemisia taurica Willd (4%) and representatives of the Poaceae family: Festuca varia Haenke (4%), Elytrigia gracillima (3%), Stipa daghestanica Grossh.) (3%).

It is necessary to create protected areas in the areas of growth of the studied species for the conservation of plants in situ. The results of community studies are presented for the first time and can be used in monitoring work on rare endemic species.

Financing. The work was carried out on the topic of the State Task of the Mountain Botanical Garden of the Dagestan Federal Research Center of the Russian Academy of Sciences «Geoclimatic features of distribution and description of communities with populations of rare and resource tree species of the North Caucasus» No. 1021032423798-8-1.6.11. 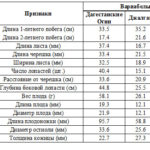 Figs (Ficus carica L.) are one of the oldest species of fruit trees grown in the world. The territory of Dagestan is the northern border of the distribution of figs. The protection of rare plant and animal species is justified by the value of these species as components of arid ecosystems, for the preservation of which it is necessary to know the reasons for their decline. A positive solution to these problems is seen in the study and development of new technologies for the conservation of the biodiversity of arid ecosystems. In this paper, we analyze the diversity of 14 morphological features. The results of the studies showed significant variability in all the studied natural habitats between fig plants. There are three groups of biomorphotypes, which appear depending on the growing conditions: 1) a tree with 2-3 trunks, up to 6-7 m high-Untsukul; 2) a shrub up to 3-5 m high – Dzhalgan and Dagestan Lights; 3) a shrub up to 1.5 m high-Sarykum and Oaks. Given that F. carica is listed in the Red Book of Dagestan (2009) and grows in this region at the edge of its range (the northern border of the species ‘ distribution). The study of its diversity is of great scientific and practical interest. The data of the conducted studies of the populations of the rare species F. carica in Dagestan, the assessment of its condition and recommendations for protection are of monitoring importance and are presented for inclusion in the latest edition of the «Red Book of the Republic of Dagestan».

Funding. This work was carried out within the state assignment No. АААА—А19-119020890099-4 “Structural and Functional Features of Plant Communities with Populations of Rare and Resource Tree Species (on the Example of the Eastern Caucasus)”.