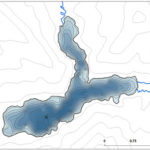 Based on the literature data and our own materials, the development of the ecosystem of Lake Kezenoy Am (Ezynam) over the past 100 years is described. It is shown that the ecosystem underwent a catastrophic transformation as a result of the introduction of chub (Squalius cephalus orientalis Linnaeus, 1758) in the middle of the XX century and perch (Perca fluviatilis Linnaeus, 1758) in 2013-2014. According to the trapping we conducted and the survey data we collected, the endemic subspecies of trout (Salmo trutta ezenami Berg, 1948), previously represented by two sympatric forms with lake and stream spawning, has almost completely disappeared in the ecosystem. An additional factor in the degradation of the ecosystem was the greatly increased intensity of net fishing. In modern conditions, the pond is dominated by perch, a subdominant species-chub. Native fish species are currently displaced to the periphery of the ecosystem: the Terek gudgeon (Gobio holurus Folwler, 1976) is found only in the lower reaches of the tributaries, the Eisenam trout in the basin of the lake has disappeared completely and is presumably found only in the upper reaches of the tributaries. Based on the analysis of the literature data on the transformation of similar ecosystems, it can be argued that the consequences of the degradation of the fauna of Lake Kezenoy Am are irreversible, and in the coming years there will be a complete disappearance of the Red Data Book Eisenam trout. Urgent measures are required to preserve the endemic species, including artificial trout breeding and reclamation measures to reduce the number of introduced species.

Acknowledgements. The authors are grateful to the administration of the recreational complex “Kezenoy”, which provided us with full technical support at the worksite.

Financing. This research was carried out within the state assignment No. АААА-А19-0101590064-1 “Resource Potential and Structure of Game-Fish Populations, Modern Trends of the Ecosystems Dynamics in the Dagestan Region of the Caspian Sea, and Patterns of Their Formation”, and it was also partially supported by the Russian Foundation for Basic Research, Grant No. 16-04-01687 “Stable Food Diversification of the Salvelinus (Salmonidae) Loaches in Littoral Ecosystems: an Individual Specialization, or a New Round of the Microevolutionary Process?”.