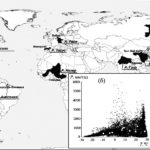 Scenario projections of changes in climatic water availability for vegetation (water availability index averaged over a climatic period (~ 30 years)), as well as changes in the variability of annual water availability for vegetation of the corresponding territories due to possible climate change in the 21st century for a number of large river basins of the globe, characterized by different natural conditions, were obtained using the land surface model SWAP developed at the Institute of Water Problems of the Russian Academy of Sciences. The ratio of the real annual transpiration to its potential value was used as an indicator of the water availability for plants. Eleven river basins (the Rhine, Tagus, Ganges, Lena, U. Yellow, U. Yangtze, Niger, Mackenzie, U. Mississippi, U. Amazon, and Darling) suggested within the framework of the International ISI-MIP project and located on different continents of the globe under different environmental conditions were used for the study. Meteorological forcing data to run the SWAP model were simulated by five General Climate Models (GCMs) for four climate change scenarios of the RCP-family up to the end of the 21st century.

It was shown that only five river basins (the Tagus, Ganges, Niger, U. Mississippi, and Darling basins) have the problems related to the water deficit. The other river basins are characterized by a humid and semi-humid type of climate, which will not change by the end of the XXI century. For the basins of the five abovementioned rivers, the change in the degree of their water availability due to possible climatic changes was analyzed in more detail. Changes in average (climatic) value of the annual water availability of these basins and in variability of water availability were investigated by means of construction of the integral distribution function of annual water availability for the historical and prognostic periods. It was shown that for the arid and semi-arid basins under study the degree of water availability by the end of the 21st century will be the same as for the historical period or even decrease.

Thus, for arid and semi-arid regions, the possible climate change in the 21st century will exacerbate the serious problem of the food security of mankind associated with the agricultural sector and water management. This problem will require an accelerated transition of human interaction with Nature to the principles of «green farming», which is based on application of nature-based technologies for using natural resources rationalizing the consumption of water, soil, energetic and other resources of the planet.

Acknowledgments. The authors are grateful to everyone, who organized the Water Section of the International ISI-MIP Project on a regional scale, for the provided data and materials for the river basins studied in this work.

Funding. This work was carried out within the state assignment of Water Problems Institute of the Russian Academy of Sciences, Theme No. 0126-2021-0001 (state registration No. 121040700170-9) “Development of a Methodological Base and Digital Technologies to Support Decision-Making for Ensuring the Water Security of Crimea” and Theme No. 0147-2018-0001 (state registration No. АААА-А18-118022090056-0) “Study and Modeling of Processes of the Land Hydrological Cycle, Hydrophysical and Hydrodynamic Processes, Formation Patterns of Resources of the Surface Water, Soil Water and Groundwater under Changing Natural Conditions”, as well as with the financial support of the Russian Science Foundation, grant No. 16-17-10039 “Calculations and Forecasts (Including Assessment of Their Uncertainty) of the Water Balance Components of the River Basins Located on Different Continents of the Globe”. 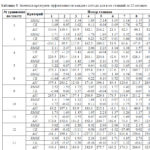 Reference evapotranspiration (ETo) plays a key role in irrigation system design as well as water management of agricultural ecosystems under irrigated and rainfed conditions. While many methods for estimating the ETo have been developed during the past several decades, method selection essentially depends on the availability of measured climatic variables. The FAO-PM56 method is widely used in agricultural and environmental research to estimate the ETo. However, it requires several climatic parameters that are not always available in developing countries, especially in arid regions. Here, we compare and evaluate the performance of 13 widely- and commonly-used equations for estimating ETo against that predicted using the FAO-56PM model using climatic data from nine meteorological stations located in arid regions across Iran. On average, the best three methods that could be used as an alternative to the FAO-56PM equation were the Irmak (Irmak et al., 2003), Hargreaves-Samani (Hargreaves and Samani, 1985), and Hargreaves (1975) equations.