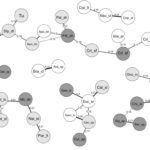 The authors performed a statistical analysis of hydrochemical and hydrobiological data obtained during the sampling of macrozoobenthos, meiobenthos and zooplankton in 2013, 2018 on different biotopes of five highly mineralized rivers of the basin of the hyperhaline Lake Elton. The authors consider the general patterns of the species structure of the meta-community of aquatic organisms based on the concept of Leybold and Mikkelson (Leybold, Mikkelson, 2002). Using random null-models the authors tested the hypothesis of consistent species occurrence (coherence), the formation of compact species associations (boundary clumping), and the regular change in the species composition along ecological gradients (turnover). The authors found the unsteady and intermittent nature of changes in biotic diversity, as well as the high mosaic taxonomic structure, that is typical for stochastic-type ecosystems.

The authors established a close correlation within individual mixed associations of benthic and plankton species. This relationship is due to biotic interactions and the coordinated response of organisms to environmental factors. Using statistical models of the “random forest” and subsequent multivariate analysis, the authors identified groups of species according to their degree of tolerance to external abiotic influences and determined the complexes of factors that have a significant impact.