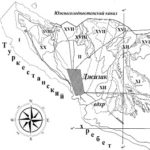 The article considers the natural conditions of the Jizzakh steppe in the 70-80-ies of the XX century. During this period, we created a series of maps that reflected the natural diversity of the steppe before the beginning of its reclamation development. The series of cards includes: 1) map of lithological and geomorphological zoning, 2) soil map, 3) maps of salinity, 4) map of gypsum-bearing soils. All the listed maps were created on a topographic basis of M 1:100000 using aerial photography materials. On the territory of the Jizzakh steppe, 22 lithological-geomorphological regions were identified, united into 5 lithological-geomorphological regions. Within their limits, detailed soil-salt maps M 1:2000 were additionally compiled for key areas. A series of maps is a kind of geoinformation system that characterizes the state of the soil cover of the Jizzakh steppe before its development.

The article provides information about the soil features of the selected areas. It is shown that within the limits of lithological and geomorphological areas, the selected areas differed significantly before irrigation in the history of development, lithological structure, structure of soil cover, degree of salinity and gypsum content of soils, and, therefore, in their reclamation properties.

The analysis of the differences in the initial soil-reclamation state of the selected regions and districts will now allow for a more reliable assessment of the advantages and disadvantages of the reclamation measures carried out in different areas of the Jizzakh steppe, taking into account their natural features.

Acknowledgement. We thank L.A. Gafurova, who, at our request, provided us with a list of recent works containing information about the current state of the soils of the Jizzakh steppe.

Financing. The work was carried out on the topic of the State Task of Research No. 0591-2019-0023 “To identify the features of soil salinization in different regions of Eastern Siberia and adjacent territories”.