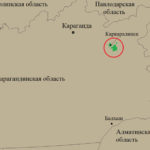 Taking the Karkaralinskiy National Park (NP) situated in the Central Kazakhstan as an example we analyzed and estimated the potential hazard of infection by natural focal diseases for tourists and park visitors. Medical geographical characteristic of the territory has been made using three following approaches: 1) estimation of natural preconditions for emergence and maintaining of natural foci of infections; 2) mapping of existing natural and anthropurgical foci of infections taking the landscapes as basis; 3) analysis of population morbidity according to the data of medical statistics. Medical-geographic situation in Karkaralinskiy NP is comparatively favorable as a whole among all others NP in Kazakhstan: it has less nosoforms, little number of natural foci of diseases and low rate of population morbidity. But the natural hazard of diseases still exists because there are the cattle cemetery of Siberian plague, foci of rabies as well as foci of tularemia functioning in the population of water and near-water rodents, which partly coincide with the popular touristic routes on the park territory. Those foci of infections are attached to the landscapes of small hills and forest lowlands, but they still have natural as well as anthropogenic background.