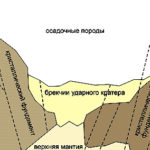 The article presents data confirming the theory of the meteorite origin of the South Caspian Basin, one of the largest reservoirs located in the arid climate zone. The theory in question was first proposed by Edmund Halley (1964). As a result of the disaster, the natural habitat of fauna and flora far beyond the Caspian Sea has changed. Arguments in favor of this hypothesis are not only geological, geomorphological data of the ring structure of the area, but also seismotectonic features. For the analysis, data from the IRIS seismic monitoring for the period 1970-2019 were used. The centers of earthquakes with a magnitude of M ³ 3.5 form the boundary between the northern and southern parts of the Caspian Sea, which coincides with the direction of the deep faults of the Caucasus-Kopetdag geological structure. On the territory of the Southern Caspian Sea, most earthquake foci are located along the coastal part, forming an annular structure, and are confined to areas of neotectonic contrasts that coincide with the faults of the coastal zone of the Caspian Sea. The central part of the South Caspian Basin is aseismic. As a result of the asteroid impact, the central part was compressed, and around it formed fractured zones of seismogenerating faults, permeable to the rise of deep fluids.