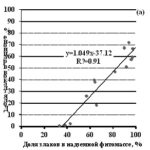 Modern climatic changes, weakening of the anthropogenic pasture load, the growth of steppe fires, have caused the expansion and dominance of grasses vegetation on the steppe pastures of Russia and Kazakhstan since the end of the 20th century, which caused a deterioration in the forage quality of pasture vegetation, was one of the reasons for the depression of the saiga population and, of the increase in cases of mass mortality of saigas. Mass deaths of saigas occurred in Kazakhstan in 2015, when about 200,000 animals died. A large number of different versions have been put forward about the causes of death: from an infectious disease (hemorrhagic septicemia), toxic forage plants, unfavorable weather conditions, to the destructive effect of rocket fuel. In this article, we have considered a different versions of death associated with the negative effect of low-quality food in places of death of saigas. It has been shown that the supply of food to saigas on steppe pastures consistently decreases with an increase in the abundance of grasses in forage vegetation. Suitable pastures that provide adequate nutrition for breeding saigas include pastures with a share of grasses in the aboveground phytomass of no more than 30%. If this level is exceeded, the pastures do not provide the necessary level of nutrition for the breeding saigas and are unsuitable for them. It is possible that during the spring migration the saigas found themselves within the steppe regions with a predominance of turf grasses (65-75%), exceeding their permissible (threshold) abundance (30%). This condition of the pasture did not provide the necessary nutrition, caused a weakening of animals during the rearing period, promoted the activation of infectious septicemia in breeding saigas, which, possibly, with the combined action of both factors, led to their mass death.

Financing. The work was carried out under a grant of Russian Foundation for Basic Research, project No. 18-04-00172: «Toxic components in the vegetation of natural pastures as indicators of the quality of forage resources, their impact on food security and the state of populations of herbivorous mammals in terrestrial ecosystems.»