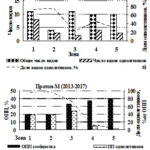 The article describes the vegetation cover formed after 4-12 years at three places of accident fallings of launch vehicles that use toxic compound unsymmetric dimethylhydrazine (UDMH) as a fuel component. The crash of a launch vehicle is accompanied by chemical, mechanical and thermal (or pyrogenic) effects on vegetation cover, which extends to different distances from the center of impact site and forming typical zones of technogenic disturbances. To characterize the vegetation cover we performed geobotanical descriptions at three sites of launch vehicles accidents that occurred in 2006–2013. Vegetation were characterized at plots located at different distances from the center of the impact site. A special feature of the overgrowth at the studied sites is the formation of communities of annual saltworts (Climacoptera lanata, Salsola laricina, S. paulsenii, etc.) with a relatively high projective cover at the site of the former crater due to subsidence of the ground and redistribution of surface runoff. With the distance from the center of the impact site the processes of demutation (self-restoration) of the initial vegetation performs: the participation of annuals within phytocenoses decreases, the total projective cover and floristic richness of plant communities increase. Self-restoration of phytocenoses without biological remediation may lasts at least 15 years according to the most optimistic forecasts.