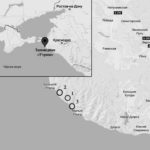 In recent years, the spread of wildfires in Russia and the world has increased. Fires have a catastrophic impact on forest ecosystems, as well as a significant impact on the biota and biological activity of soils. The enzyme activity of arid forest Cambisol of the Black Sea coast of the Caucasus after exposure to fires has been evaluated. The study area is located on the Abraus Peninsula of the Black Sea coast of Russia in the state nature reserve «Utrish». The xerophytic forests and woodlands common here consist of various types of junipers, oaks, pistachios and other species, the soil cover is represented by a Cambisol combination of varying degrees of thickness, stony, carbonate and humus. The studied post-pyrogenic sites differ by a different recovery period (0-11 years). Soil samples were taken from three different depths (0-3, 3-10 and 20-30 cm) in three-fold repetition. A significant long-term effect of fires on the activity of enzymes (catalase, invertase, peroxidase, urease) in subtropical Cambisol has been shown. The content of organic carbon in the surface horizon immediately after a fire increases due to the accumulation of pyrogenic carbon of ash and soot on the soil surface. A year after the fire, the carbon content in the soils decreases by 47%, and after 11 years it approaches the control values. The activity of catalase, urease and phosphatase of post-pyrogenic Cambisol immediately after the fire was reduced by 43-69% compared to the soil of the control site. The activity of peroxidase, on the contrary, was stimulated by fire. In the future, the degree of inactivation of enzymes and changes in the organic carbon content in post-pyrogenic soils depended on the time of post-pyrogenic restoration of ecosystems and the type of enzyme. The peculiarities of changes in the activity of enzymes during the restoration of post-pyrogenic Cambisol were revealed. The complete restoration of the enzymatic activity of post-pyrogenic Cambisol did not occur even 11 years after the fire. A change in the correlations of enzyme activity and the content of organic carbon in the soil in post-pyrogenic Cambisol of different ages has been established.

Acknowledgements. The authors express their gratitude to O.N. Bykhalova, the deputy director for scientific work of the “Utrish” State Nature Reserve, for allowing us to carry out the research on the territory of the reserve.

Financing. The study was carried out with the state support of the leading scientific school of the Russian Federation “Agroecological state of soils under various anthropogenic influences” (NSH-2511.2020.11).