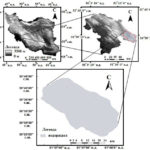 Land cover change has direct effect on ecological functions and processes of landscape and natural resources. Forest degradation affects watershed processes and biochemical cycles and leads to soil erosion and water shortage; therefore it is necessary that the spatial dimensions of land use and land cover are identified regularly so that the policy makers and researchers are enabled to make the necessary decisions. Patterns of land use and land cover changes indicate the changes in social and economic conditions. Monitoring such changes is essential for coordinated activities at national and international levels. In recent years, due to easy access to satellite imagery and capabilities of GIS, land use and land cover changes modeling and prediction is very common. To this end, different methods such as statistical techniques like logistic regression, Markov chain analysis and cellular automata have been developed. This study has been done to investigate the land use and land cover changes in Yasouj city area using CA-Markov from 1987 to 2039. Markov chain analysis will describe land use changes from one to another period and use this as a basis to project future changes. This is possible with the development of land use change transition probability matrix from one time to another; which indicates the nature of changes and its application to project changes in the next time period. Results of model and its simulation showed that the area percentage of natural lands (forests and rangelands) in 1987, 1999, 2013 and 2039 was 90, 82, 73 and 59 respectively. The area percentage of man-made lands (farmlands and residential area) in 1987, 1999, 2013 and 2039 was 10, 18, 27 and 41 respectively. Therefore, it can be said that the natural lands in the study area are becoming man-made lands so that in about 40 years (1987 — 2013), about 30% of the natural lands will decrease. This could have dangerous environmental consequences for the study area. Results of logistic regression with Pseudo R2 0.3 and ROC about 0.8 represent the relative agreement of the model with actual changes and the appropriate ability of the model for estimating changes in land use and land cover in the last 26 years. Results on simulation of land cover map in 2013 and 2039 showed that CA-Markov has a high ability and capability in land cover changes modeling. In this study the accuracy of the resulting land cover map was 80%.