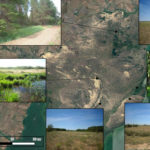 Financing. The work was carried out within the research No. AAAA19-119042290014-5 “Theoretical foundations of water resources management in the forest-agrarian development of arid territories of the Russian Federation on the basis of a dynamic model of the water balance of the region, mathematical modeling of the processes of formation and dynamics of groundwater and surface waters, assessment of the impact of climate change and anthropogenic loads on the agro-resource potential and forest-growing conditions”.