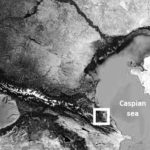 The study of the dependence of chemical and microbiological properties of soils of agricultural terraces of the middle mountain zone of the Eastern Caucasus formed on limestone and shale, on the exposure of the slope is presented in the article. It is established that the slope exposure significantly affects the properties of soils of the same type of soil-forming rocks. The formation of terraces with an arable surface close to horizontal changes the angle of incidence of sunlight, which leads to an increase in the heat supply of soils on the slopes of the northern exposure and a decrease on the southern slopes. As a result of the change in the thermal regime, in the upper horizon of terraced soils, the differences in chemical and microbiological properties on the slopes of the northern and southern exposures decreased, compared with the differences in the background soils that were not subjected to terracing. The leveling effect of terracing was more pronounced on gentle slopes of 5-15°, with the greatest width of the terraced canvas, compared with the soils of narrow terraces formed on steep slopes.

Financing. Chemical and microbiological analyses were carried out with the financial support of the RFBR grant «Anthropogenic soils of agricultural terraces of the Caucasus» No. 19-29-05205, 2019. Field work in 2019 was carried out within the framework of State Task No. 0191-2019-0046.