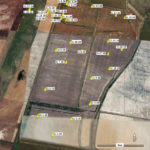 The presented study is aimed at identifying the current salinity state of the soils of the Generalovskiy Irrigation System (IS), built near the Tsimlyansk reservoir (1959) and located in the dry-steppe zone of the Volgograd oblast, in the Don Valley. The system is currently in the conditions of a 30-year period of cessation of irrigation. During the interpolation study, soil salinity maps were created, covering their different depths and based on field survey materials and water extraction data (1:5) of soil samples collected in 2020. Water extraction data obtained in the Volgograd Hydrogeological and Reclamation party (2018) were also used.

The key plot of the research was located on the 2nd left-bank terrace above the floodplain of the Don River and included the territory where by the beginning of the 1990s, during a long period of irrigation, a high level (1.5-3 m) and strong mineralization (3-10 g/l) of groundwater formed, which led to the forming of meadow solonchak and secondary salinized soils of a strong degree of salinity. This stimulated the salinization mapping of the territory and encouraged us to determine the changes happened during the past period.

The analysis of soil salinity maps made it possible to: assess the current salinity state of soils located on various elements of the topography of the second terrace of the Don River and comparison of the current salt state of soils with the period of the late 1980s and early 1990s, which showed the gradual salinization of previously saline areas and the development of alkalinization of the upper horizons of soils. Soil salinization is caused by the cessation of irrigation, and soil alkalinization is caused by the location of the Generalovskiy IS in the salt zone, a long period of irrigation (1960-1992) and irrigation from the Tsimlyansk reservoir with water with an increased concentration of sodium. Soil salinity maps showing the depth of the salt horizon provide information necessary for the development and selection of optimal reclamation measures to restore soil fertility.

Preliminary recommendations for solving this problem when irrigation is resumed may be: quality control of irrigation water, the use of periodic (every few years) spring water-supply washing of the 0-70 cm layer to push accumulated salts out of the aeration zone, plastering to ensure the displacement of exchangeable sodium, suppression of alkalinity and removal of water-soluble sodium into the underlying horizons beyond the root layer, the use of drip irrigation, an increase in the sharer of perennial legumes and cereals in the structure of planted acreage.

The impossibility of using spectral indices (given in the literature) to determine soil salinity with the help of satellite imagery in relation to the selected research area is shown in the article. A multiple regression analysis was carried out to confirm this. In this analysis, the values of spectral indices in four channels of the Sentinel-2 satellite image and the salinity values of different soil horizons at the sampling points obtained as a result of field and laboratory work were used as features. According to the results of regression analysis, there was no significant relationship between spectral indices and salinity values in all soil horizons. The obtained correlation coefficients were lower than 0.5 and, therefore, the relationship was very low.

Financing. The work was carried out on the topics of state tasks No. 0591-2019-0023 «To study the influence of natural conditions and land use features on the soil cover, including with the participation of saline saline and slitized soils and to develop a technology for assessing the intensity of exploitation of agricultural land soils» and No. AAAAA-A19-119012390065-9 «Development of methods for analysis and integrated use of remote sensing data based on modern geoinformation technologies for monitoring natural landscapes of agricultural lands using groups of small spacecrafts».

Acknowledgement. The authors express their gratitude to the employees of the Volgograd Hydrogeological and Reclamation Party for the data provided for the work.