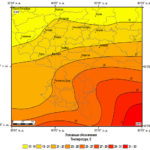 The paper presents the results of the analysis of trends in the average monthly air temperature, arid lands of the European part of Russia and the territories associated with them, in the summer period, as well as estimates of their direction and speed of temperature changes in the second half of the twentieth and early twenty-first centuries. Against the background of the global climate, the regional features of the thermal regime of the European territory of Russia (ETR) are studied. The analysis of latitudinal and longitude quantitative indicators of changes in the thermal regime, with a spatial distribution in the study area, is given. A significant increase in air temperature was found in the territories of arid lands of Russia, where the trend of temperature increase is significantly higher than the data presented in the Assessment Reports and amounted to 0.066oC over 10 years.