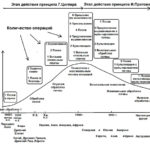 The evolution of agricultural technologies in the development of human civilization is under consideration. As we can see in the XX century a new stage of tillage technology has begun, connected with the transition from “gray” extensive technologies for managing natural resources, which are strictly focused only on short-term economic feasibility, to non-traditional (environmental, nature-like, nature-based, “green”) farming technologies. There was a natural transition of strategy of human development, based on the principle of Ziegler’s maximum entropy production, to Prigogine’s minimum production strategy, based on the rationalization of the use of available nature resources by the human population. The rationalization is based on nature-based technologies employed by people to use natural resources. On the example of a long-term biospheric experiment in the development of agricultural technologies, the theoretical substantiation of the inevitability of “green farming” has been confirmed. “Green farming” is characterized by more economical methods of tillage: partial or complete rejection of dump plowing, lack of vertical mixing of the arable layer, minimal soil disturbance by agricultural machines and mandatory soil mulching (no-till or mulch tillage) in order to preserve soil moisture and reduce soil erosion. The system of zero tillage (associated with the absence of interference with natural soil formation processes) is a modern farming system, in which practically tillage is absent and soil surface is covered with specially crushed plant residues – mulch. It is illustrated that at present, no-till direct seeding and mulching technology is being introduced in various regions of the planet, while using fine, surface loosening or even a complete abandonment of tillage. It has been shown that the use of green farming technology leads not only to rationalization of use energy and soil resources, but also economy of water resources, the situation with which is becoming more intense for human civilization.