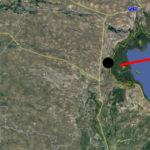 The article discusses the results of soil and geobotanical studies at the plots on the coastal plain of the Caspian Sea (Northern Dagestan) of different ages: 1340 ± 36 years calBP (Kaspii-1) and 293 ± 13 years calBP (Kaspii-2). Changes in the biodiversity of the vegetation cover and the soil-salinity variation over time are assessed. It is shown that the variability of soil salinity (range, quartile scale, and standard deviation) at the local level (areas of nonuniformity with linear dimensions of meters or tens of meters) has increased, while the parameters of vegetation biodiversity (floristic richness, the species number, the families number, the number of long-vegetating herbaceous perennials and ephemers, the presence of species with different salinity tolerance, and differentiation of the intracoenotic diversity) have decreased. The plot with a Tamarisk community (Kaspii-2) is characterized by a statistically significant, moderate correlation (R2 = 0.29) between soil salinity and vegetation based on data on the distribution of dominant species, whereas this correlation is not significant on the older plot with a saltwort—suaeda community (Kaspii-1). The data show that, when the area dries up after sea regression, the variation in soil properties (salinity) and vegetation changes in different directions: the variation in soil salinity (functional pedodiversity) increases with age, while the variation in vegetation (phytodiversity) decreases. Moisture availability is obviously the main factor limiting the biodiversity on the older plot on the background of high salinization of soils on the both plots as evidenced with the smaller moisture reserve in the top 1-m soil layer on the older plot.