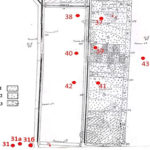 During the growing season of 2021, in early May, late June and early September, observations were carried out on the functioning of the main components of ecosystems recovering after reclamation at 8 sites of the IV experiment of the Arshan-Zelmen hospital, where reclamation work that lasted 20 years was stopped almost 50 years ago. Currently, soils belong to one type of highly transformed soils, the deep-saline agrozems. Arable (0-45 cm) and sub-arable (50-60 cm) horizons have been preserved in the soil profile. In 2018 in most areas, the content of salts and, in particular, chlorine ion increased in the subsurface horizon. These changes have not been reflected in vegetation, and the formation of plant communities characteristic of the final stages of secondary succession of light chestnut soils, not saline, continues. Hydrothermal conditions in 2021 during the observation period (May-September) can be assessed as arid – the doubly increased value of the average temperature for each month turned out to be higher than the value of precipitation that fell that month. Precipitation fell every month except July. The precipitation that fell during this period (176 mm) exceeded the average annual amount for these months of 2011-2021 by 1.3 times, and the sum of temperatures only by 2°C. Therefore, the hydrothermal conditions of the growing season of 2021 can be assessed as more favorable for the functioning of ecosystem components than in other years.

Comparison of data characterizing the salt profile of soils during the growing season showed that the content of water-soluble salts (in % per 100 g of soil) in the horizons from September to May changed in the range from -1.42 to +0.36. At different periods of observations, both unidirectional changes  in the salt content and multidirectional changes were observed in the same soil horizons. In May, the upper horizons of all soils, including virgin soils, up to a depth of 30 cm were unsalted, they remained in the same category of salinity by September. In the profile of virgin soils, salinization began from a depth of 30-40 cm and intensified downwards, reaching values of strong salinization in the horizon of 70-100 cm (1.1-2%). By the end of the growing season, the salt content in these horizons decreased to an average (0.5-1%). In soils that had previously experienced forest reclamation, the lower horizons that were slightly saline in May (80-100 cm) moved to the category of non-saline by autumn. In previously reclaimed soils under the former arable land, on the contrary, previously unsalted lower horizons have moved into the category of slightly saline. The magnitude of the change in salinity of soil horizons has a high tightness of connection (r=0.89) with the chlorine ion.

The vegetation cover is relatively sparse; the total projective coverage ranges from 35% to 73%. The average values from May to June varied from 43% to 52% and by September decreased to 47%. Throughout the year, the communities are dominated by bulbous bluegrass (Poa bulbosa) and Lerch’s wormwood (Artemisia lerchiana). Chamomile (Tanacetum achilleifolium) is present in all areas, and in some, including virgin lands, acts as a codominant. In May, the volosnets (Leymus ramosus) aspect, in June and in September – annuals Anisantha tectorum and Atriplex tatarica, respectively. The aboveground phytomass of most plant communities increases from spring to autumn from 4-5 c/ha to 10-25 c/ha. In some areas, mainly previously forested and some virgin, the maximum values were reached at the end of June and decreased by autumn due to a significant decrease in the phytomass of perennial cereals. Plant communities by species composition and dominance during the entire growing season Artemisia lerchiana and Poa bulbosa should be attributed to the pasture variant of zonal semi-shrubby-tyrsikov (Stipa sareptana) plant communities characteristic of the desolate steppe on chestnut unsalted and slightly saline soils.

The novelty of this study is associated with new quantitative data on changes in the characteristics of the main components of the ecosystems of the desolate steppes during the vegetation period.

Financing. The work was carried out within the the State Task of the Water Problems Institute of the Russian Academy of Sciences, topic No. FMWZ-2022-0002,f «Research of geoecological processes in hydrological systems of land, formation of surface and groundwater quality, problems of water resources management and water use in conditions of climate change and anthropogenic impacts». 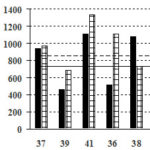