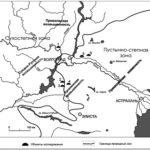 Soil microorganisms are the essential part of soil composition. Almost every soil process depends on the microorganisms’ activity, in one way or another. That is why characteristic of microbial communities is one of the most important diagnostic indices representing the conditions for soil formation. Paleosols maintain some features from the moment of their burial, which can be found in some of the parameters of their microbial community, such as the active biomass of microorganisms, ecologic and trophic structure of community, oligotrophy index etc. We studied microbial communities from the soils of different ages and different natural areas of Volga-Don interfluve, to determine the patterns of their spatial-temporal changes in connection with the current conditions of soil formation. We found out that the characteristics of communities of the modern soils in the dry-steppe and deserted-steppe areas in the south-east of the East European Plain mostly determine the specificity of the local conditions for soil formation. Thus, the soils of one sub-class, while being under different geomorphological and landscape conditions, can vary in their microbiological parameters. Or the characteristics of microbial communities of different soils can be very close, if the latter are related to the similar reliefs, soil-forming rocks and ground water level. Conditions of those communities during different historical periods are mostly determined by the patterns of evolution of specific soil areal (landscape) and bioclimatic changes during the century. Therefore, the local specificity is formed under the dynamics of the microbial communities’ conditions and their structural and functional organization.