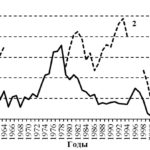 The size of the population of the saiga (Saiga tatarica tatarica L., 1766) in the Northwest Precaspian region has remained extremely low over the past 20 years. Comparison of some biological parameters of the population in the periods characterized by different animal numbers revealed some features of the phase of population depression. Thus, apart from the decrease in the numbers of saigas (from 800 thousand in 1958 to 4.5 thousand in 2016), its habitat also decreased (from 60-70 thousand km2 to 2-3 thousand km2, respectively), and a significant part of the population switched to a sedentary lifestyle in the protected areas of the Chernye Zemli ecoregion. The shortage of mature males in the population (less than 10%) over a long time led to a reduction in its growth and, consequently, to a decrease in the numbers. At the same time, the total fertility of females decreased from 1.27 ± 0.25 in the years of high numbers to 0.92 ± 0.39 due to an increase in fertility in different age groups, which resulted from lack of males in the population. More males are born in the population than females (51.9% and 48.1%, respectively). The increased weight of newborn saigas (on average by 100 g in both males and females) and their decreased mortality in the first days after birth (under favorable weather conditions) indirectly indicate the normal process course of embryogenesis and sufficient quantity and quality of feed. An increase in the proportion of mature males will lead to an increase in the population size, reproductive functions of which remained virtually unchanged during its depression.