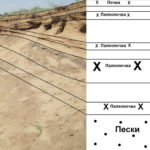 Study of the beam system of the rivers Sal and  Don in the south-east of the Rostov region of Russia allowed us to establish a significant area of distribution and a wide variety of Holocene deposits. They accumulated depending on the local features of various sites, the features of exogenous processes, landforms, the nature of soil-forming rocks and other factors. As a result of the study, Holocene deposits in negative relief forms (in the floodplain and the first floodplain terrace) formed by alluvial and deluvial processes with a certain role of

aeolian processes were identified; Holocene sediments of the second floodplain terrace of the end of the Khvalynsky stage of the Caspian Sea and the Novoevksinsky stage of the Black Sea; the intermediate form is Holocene sediments in saucer-shaped depressions. The history of accumulation of deposits on negative and positive relief elements is due to the presence of contrasting stages of environmental changes. The revealed Holocene deposits of different ages were confined to archaeological artifacts that record short-term habitats of mobile cattle breeders of different eras. They were found near identified Holocene deposits. This makes it possible to identify and further study the «invisible» sites of ancient man and obtain additional data on the anthropogenic impact on steppe resource areas in antiquity.

Financing. The study was supported by the Russian Science Foundation, grant No. 21-18-00026 «Resources and humans in the Bronze Age and the Middle Ages: the dynamics of the use of arid regions of southern Russia» (research supervisor N.I. Shishlin).